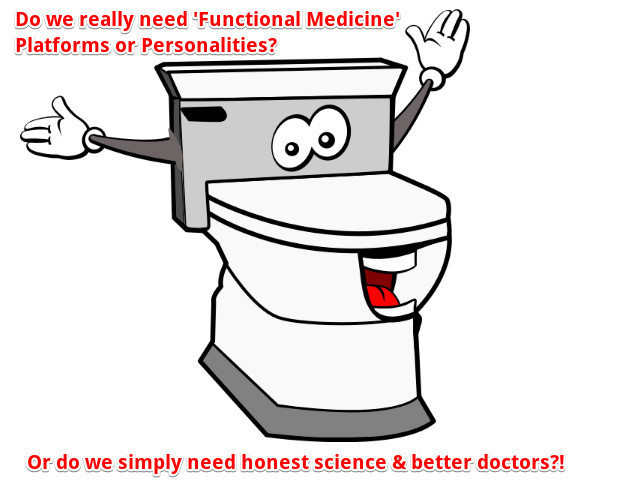 They all offer free courses, you do not need to train with any platform eg FDN ‘forgot’ to tell licensed practitioners they did not need to go through their Lab Management Directors [fee-based] for every lab test. Nor do you need any personality, often a retired chiropractor or doctor, to ‘train’ you in what they personally believe while wheeling in their pals to knit together some quilted interpretation of the science, usually not trained to do so in the first place.

Things had been getting stink in ‘Functional Medicine’ for quite some time – health coaches with 2 months training thinking they can charge clients $3000 for the first few sessions. Doctors thinking they can charge that upfront for one session with a view to getting the client to spend $15k. A woman charged $8,000 told she can’t proceed further without further tests yet stuck unable to even poop, step 1 of any old fashioned course like Dr John R Christopher’s, for example. Dr C being an old naturopath whose work is merely plagiarised in most fmed protocols which while claiming to be about science really don’t want to hear from the scientists either, like when I forced a platform to listen to Dr Alessio Fasano rather than continuously misquote him to sell nonsense ‘gluten pracitioner courses’…

However, the end of the line for Functional Medicine was how it handled COVID…systematically ignoring real experts to wheel out the same old same old…teaching health professionals nonsense just is not an option. If keto is not working for your 90 year old mom then don’t blame ‘the virus’, take a look at yourself. Better still, take a look at those who’ve been successful since April 2020 or even those who’d published successful protocols for SARS in 2013. Those names you won’t hear out there in fmed circles or summits as marketers and charlatans hog the stage – the internet a perfect breeding ground for those with needy ego [I’m sure there’s an official term for that] and for those wanting to cash in on what they see in the biggest money spinner in history, as Reed Davis called it with his money mastermind partner a so-called ‘fatigue doctor’ who will charge you $10,000 for you to ride with him as he tries to understand the research, and neither of them really interested in what worked or who the real expert was down in Lima, Peru, the real expert eradicating long covid early on…someone misquoted all the time by people like those at the ‘FLCCC’ whose website is so full of requests for money and protocols that I’ve seen countless people say were not working for them…but then again, with the summits cashing in with their unique amped up conspirational twist on things there lies the cherry on top of ‘Functional Medicine’…

Are the universities, whose research and tutors are funded by pharmaceutical industries, doing any better? Well, I’ve taken a lot of ‘fmed’ courses and uni courses, one hasn’t a clue of the science and hides or plagiarises the real experts so they can make a buck and the other merely leaves the inconvenient contradictory science off the table so they can make a buck with their chosen solution no matter what cost to lives, as with covid.

I do not recommend any course at the moment – my local osteopath will charge a humble fee to help someone move their arm again including 6 laser sessions for something like $300 for the arm… time for ‘Functional Medicine’ to get real as no one is going to put up with the nonsense of ‘the health industry’ either in terms of weak information, being fleeced, plagiarism, or the total bs knitting circle they call ‘the science’.

I no longer recommend any current training platform or personality – though watch this space as I reveal the real experts. They are not running programs to train you btw, not ‘selling’ you a dream…!