The IBS & SIBO Summit kicks off Monday September 3rd-9th, each day’s talks streaming free for 24 hours, with an encore after the summit. Hosted by Shivan Sarna, whose career path has swung from TV presenter to SIBO educator having had it herself and working closely with Dr. Allison Siebecker on her own SIBO. Dr Siebecker has helped organize this summit and is one of the big names in SIBO /IBS treatment, working closely with Dr. Sandberg-Lewis and Dr. Pimenthal, also big names in the SIBO space and also at this summit.

”Irritable Bowel Syndrome (IBS) and small intestine bacterial overgrowth (SIBO) impact more than 400 million people. Symptoms can be painful, embarrassing and isolating, but you’re not alone and there ARE solutions!”

Attend the IBS & SIBO Summit for free, and free gifts on registration.

You have access to 3 talks and transcripts to download just for registering free for the event. These are available free till the end of the summit so download them as soon as you can. 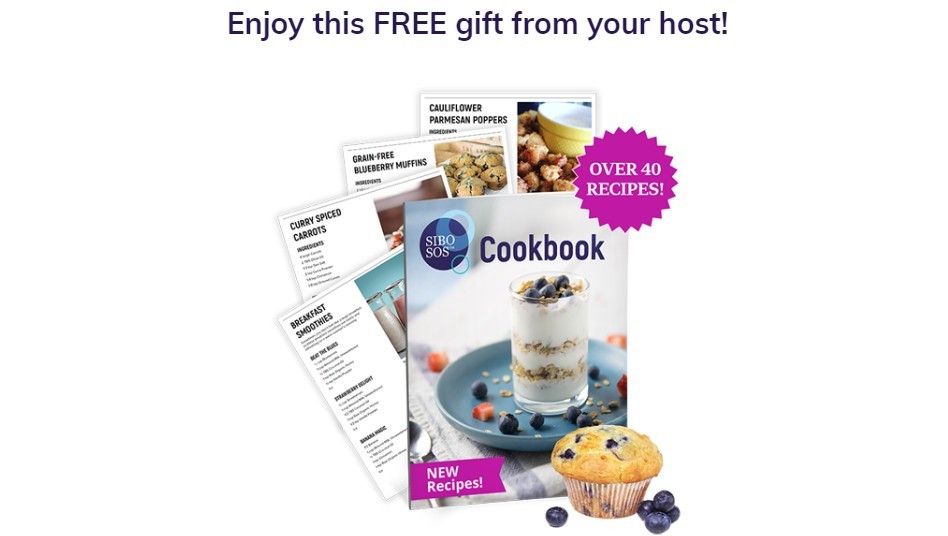 While this cookbook looks very pretty, I’d be interested to hear from people with SIBO who have tried the recipes. When I had SIBO I could not have eaten many of these foods, and I wonder to what extent it has also been influenced by paleo and keto diet fads floating around the past couple of years in its avoidance of what are known to be SIBO friendly foods eg white rice, milk!

Allison Siebecker has two gifts in here definitely worth accessing.

There are also gifts by Michael Murray [he can be pretty good], Mama Z and Niki Gratix – though I’m a little alarmed to hear Niki talk about foods ‘that improve intuition’! As much as I respect intuition, surely by any definition it cannot be influenced by foods. But we’ve already had Dr. Nandi redefine ‘spirituality’ as ’emotionality’ so who knows where she is going with this! 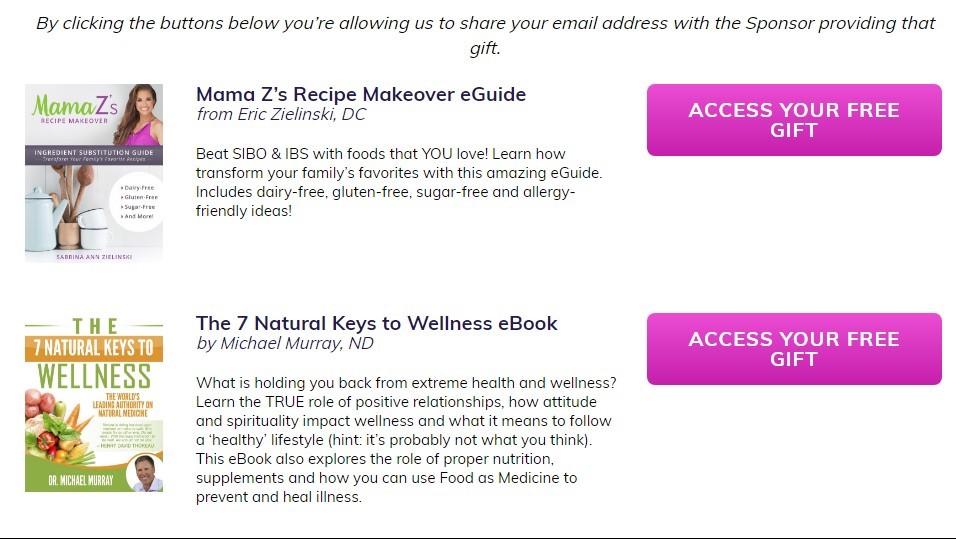 *Note you have the transcripts from Tom O’Bryan’s talk and Allison Siebecker’s talk free to download till the end of the summit! 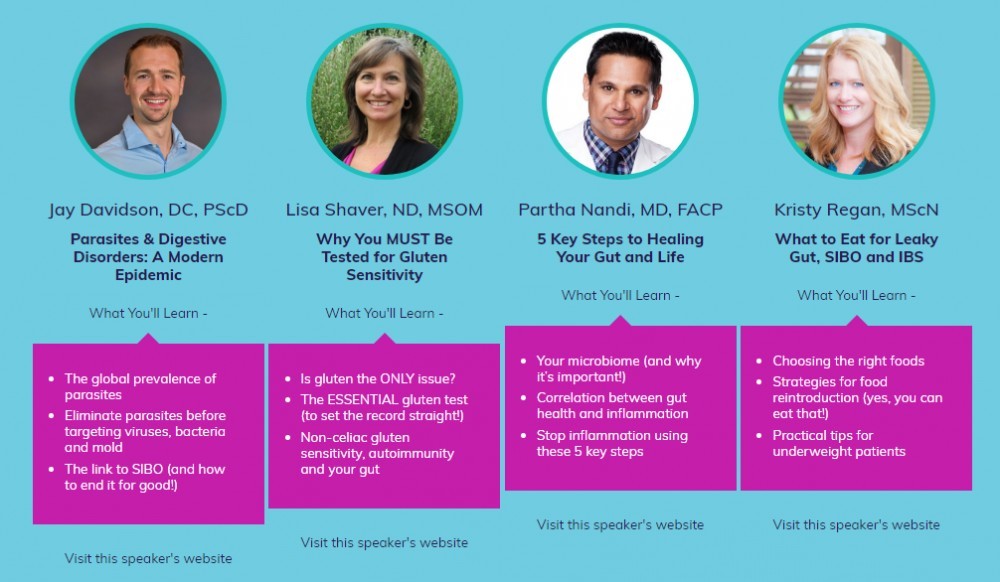 *Note: you’ve got access to Partha Nandi’s talk and can download his transcripts free till the end of the summit! 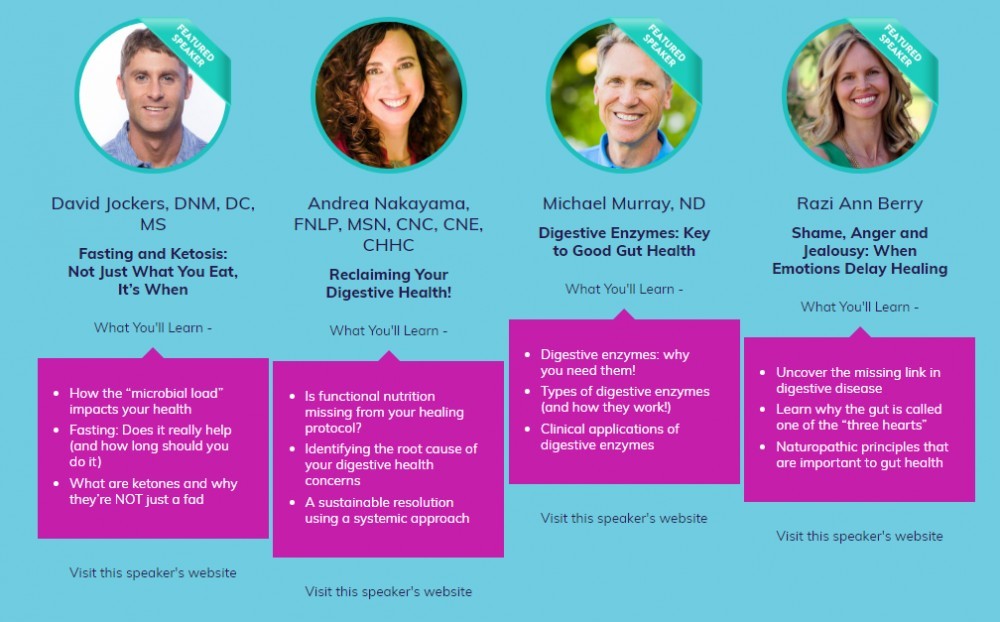 You can see some diverse dietary opinion represented in the line-up: David Jockers is keto to the core, whereas Michael Murray is not. However we have been bombarded unnecessarily by keto so heavily in summits at the moment that it would be easy to miss the fact that not everyone is keto, keto is last in the door and will be the first out it again 😉 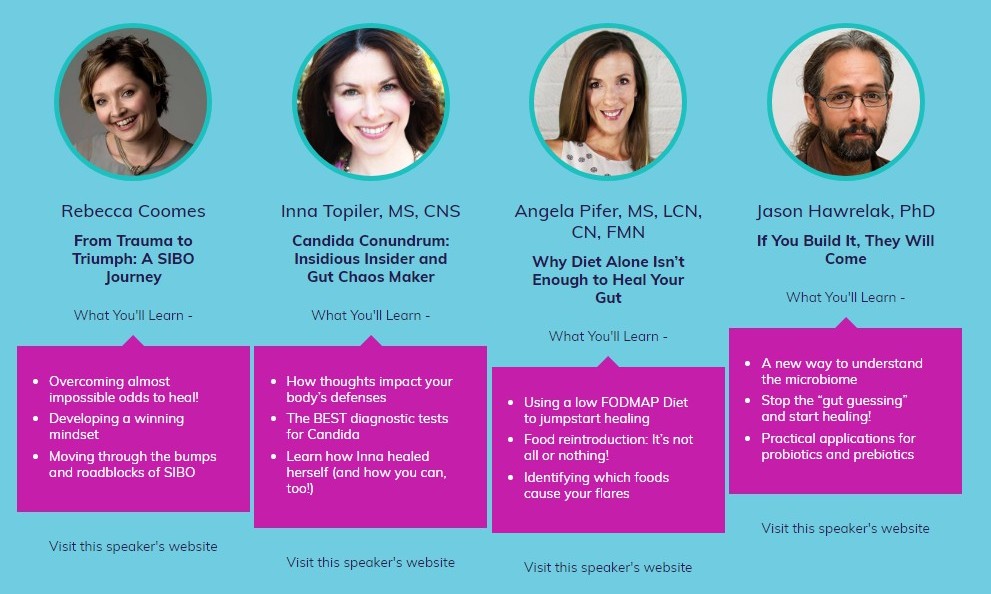 You can see the diversity in approach with this set of speakers: mindset, candida, types of diet including low FODMAPs, and microbiome. 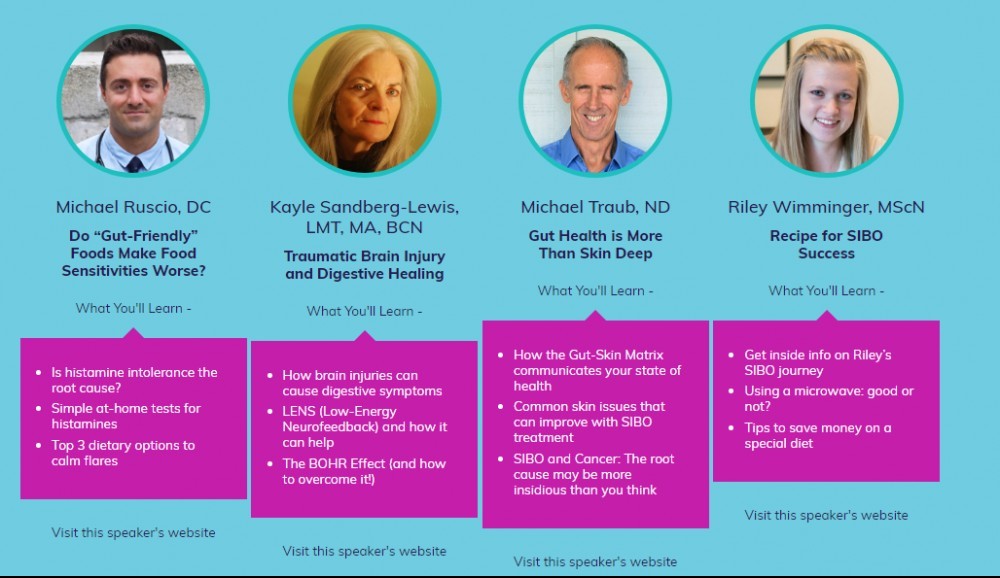 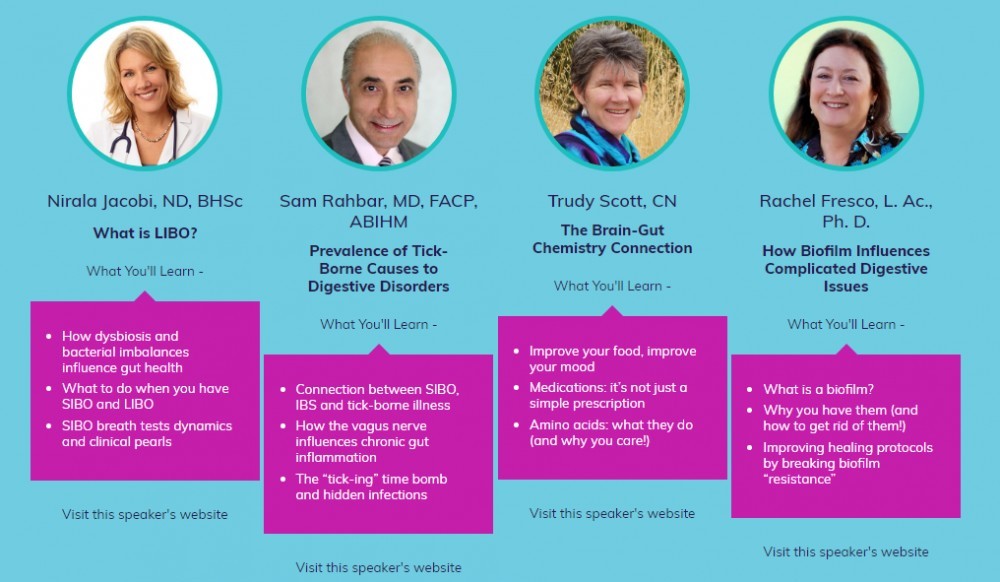 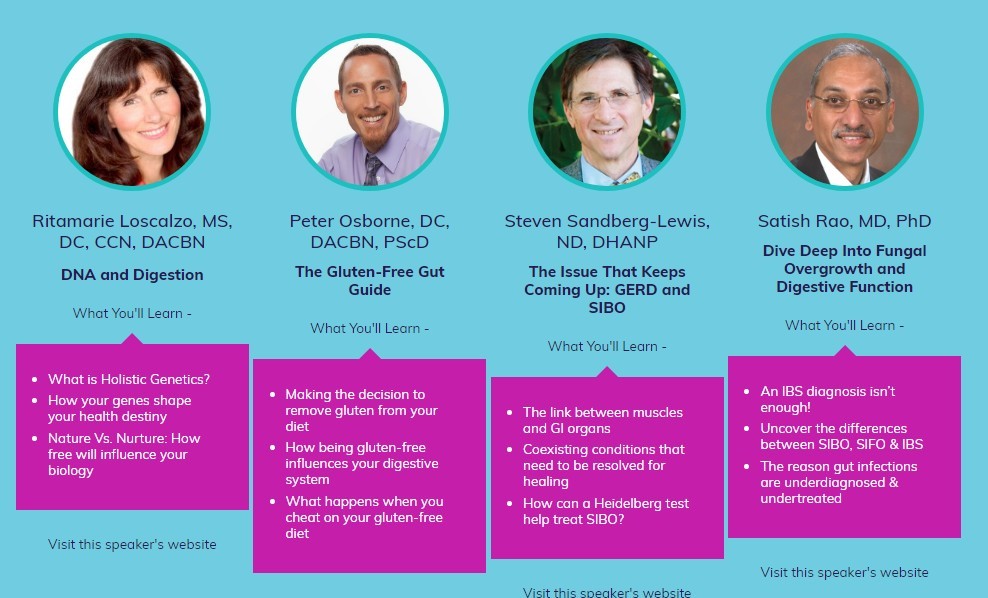 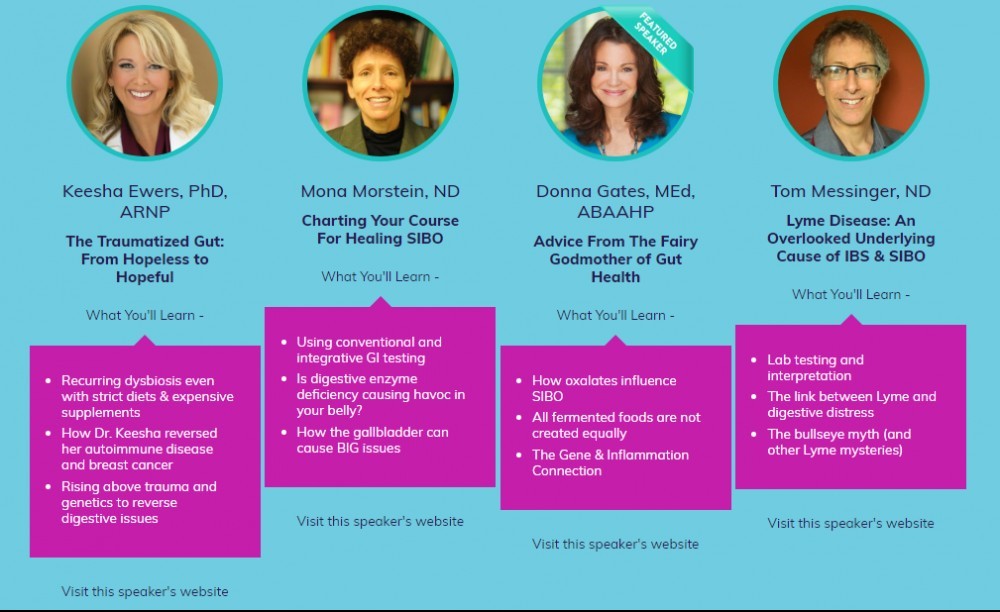 I see Mona Morstein’s talk lists gallbladder as a topic, Dr. Morstein is a great speaker, very practical and very generous with her time even popping in to offer advice to the SIBO facebook group, however I’ve heard her in the past recommend a liver flush which is something you should never try for liver gallbladder, let’s hope it does not come up in this talk. I’m one of the people had that flush drink shoot out a stone too big for the bile ducts, if I hadn’t studied and practiced using herbs for a long time I’d not have got out of that situation with a gallbladder intact! *I had tried it before hearing Dr. Morstein. 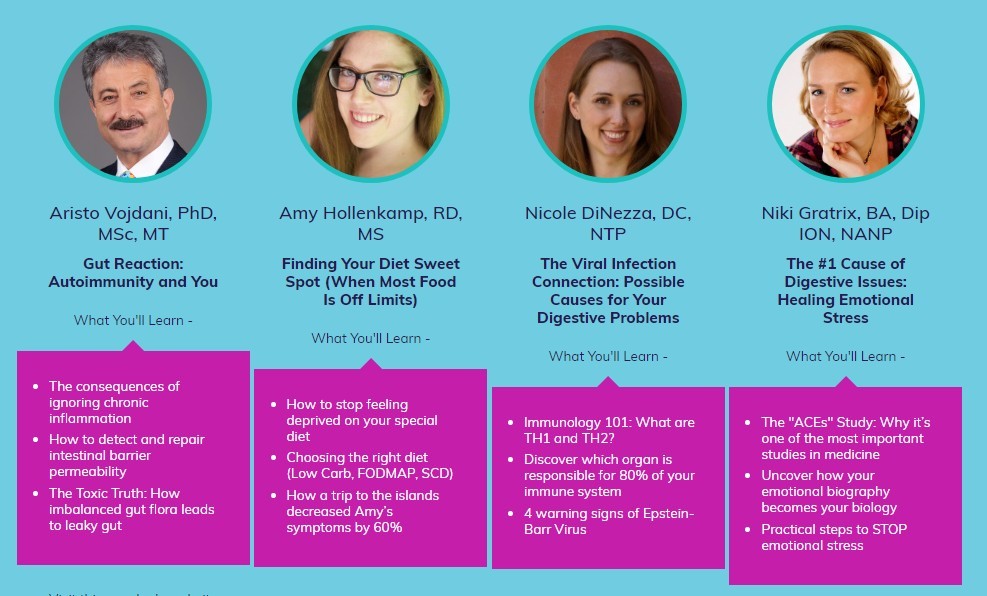 Aristo Vojdani has actually developed some of the most sophisticated tests for immune reactivity, and founded Immunosciences lab at one point. 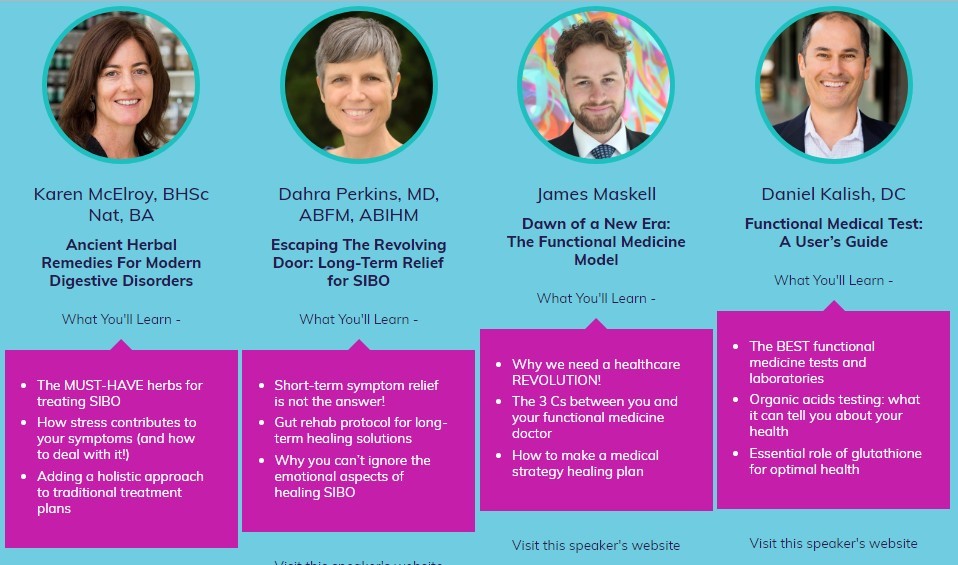 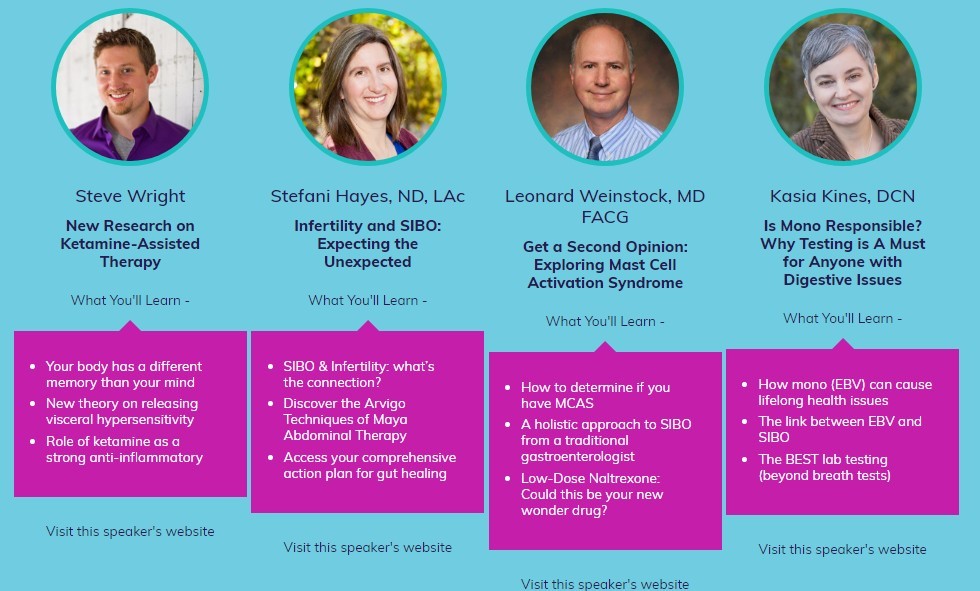 In addition to the free gifts and summit which streams for free, anyone wishing to access the speakers talks in their own time or the transcripts can purchase the summit, it’s available totally online or as a flash drive posted to your home address, or flashdrive and physical product posted out to you.

Prices start at $59 for early birds online access only, and go up accordingly after that.

For those who purchase the event a large number of other purchase gifts are included include Michael Murray’s entire Digestive Summit! So you are getting two summits for one right there!

10 Sibo Summit Bonus Purchase Gifts, including an entire other summit! 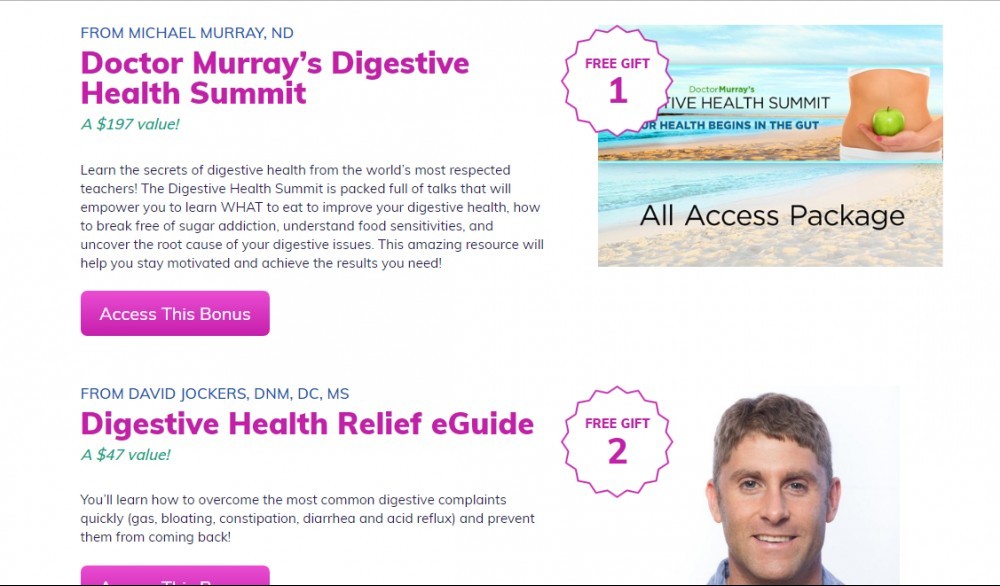 *Be careful with David Jocker’s advice on diet, he is always pushing ketogenic diet and if you heard how his wife in the third trimester of pregnancy was allowing herself a piece of sweet potato, carrot, handful of berries, your alarm bells and red flags really should be sounding at this stage. 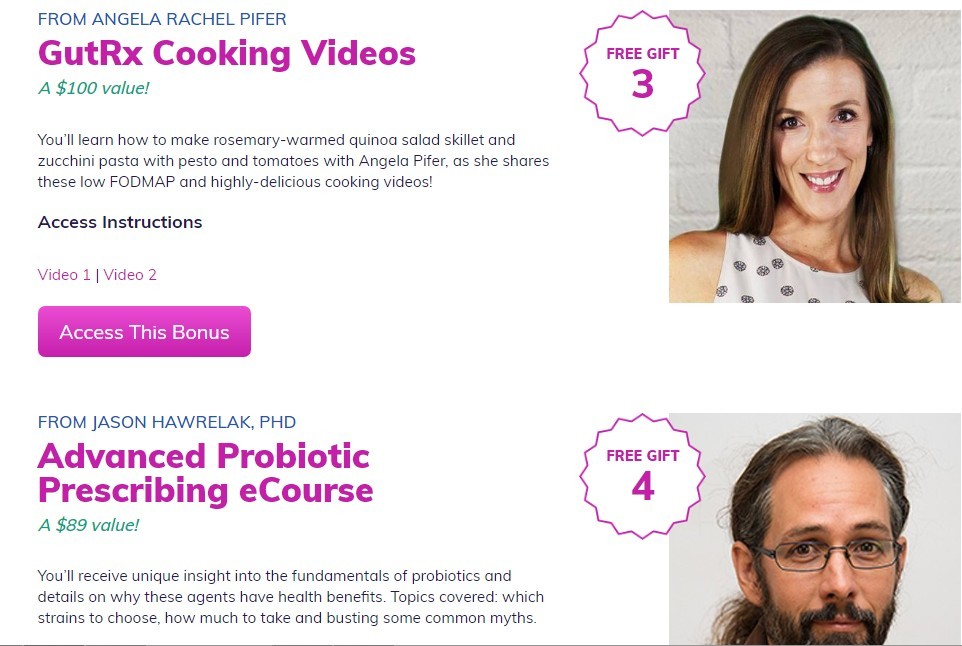 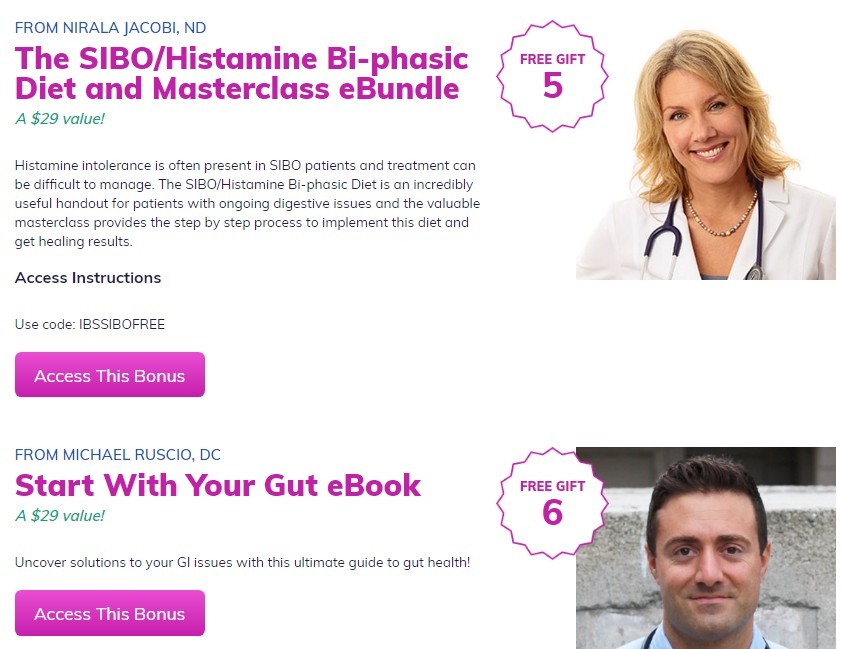 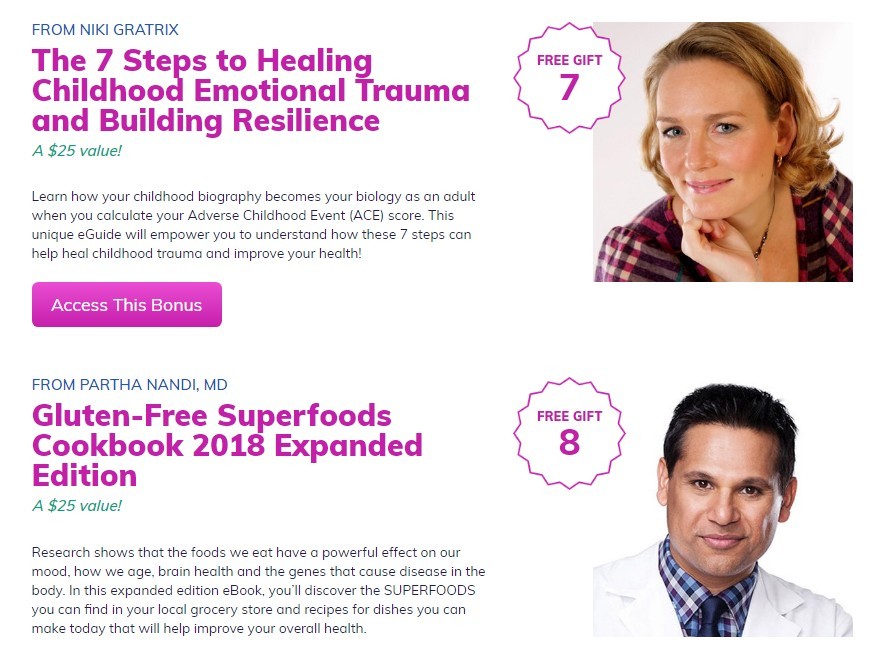 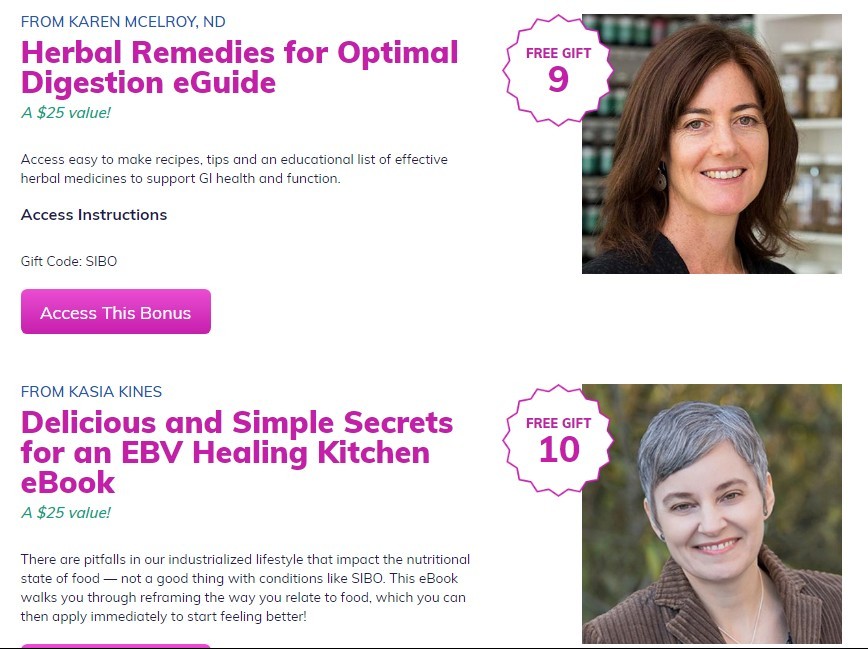 Host Shivan Sarna also kept an open facebook group all year which has been very active where people with SIBO share their journey, successes and failures, and ask for help from each other from various experiences on similar protocols. The group was actively monitored by Shivan, and at times speakers from the previous SIBO summit dropped in with advice.

Just yesterday the subject of adhesions after surgery as an underlying cause of SIBO came up and I remembered there had been a speaker on last year’s summit talking about sorting those out naturally for people, one comment later and Shivan had posted the link to people providing that service Clear Passage Physical Therapy The reason I had remembered Larry Wurn was because I met someone after that summit who’d had SIBO after surgery and was in a terrible state unable to eat anything and his doctors were not able to do anything for him! He had multiple other illnesses so that SIBO ‘cherry on top’ was even more serious to sort out. All the more reason for solutions to become part of mainstream medicine and the options we all get offered routinely going forward. It’s been over 25 years since docs did not treat my SIBO / IBS properly and I’m seeing that is still happening to people I meet globally today.

There’s been a number of lectures by various guest speakers at Functional Medicine University on the subjects of SIBO, IBS, IBD, the Gut Brain Connection, Digestive disorders, and GERD. These are very highly focused on testing and solutions by the big names in the subject area / experts as well as clinicians who have to solve this for their patients every day.

Some speakers who’ve given continuing education lessons in functional medicine at FMU who also occur at this summit include:

However there are more speakers on the subject, and in a practitioner level continuing education class you will get more details than you get at a summit.

In this SIBO summit once you purchase the event you are then offered fro a further $39 3 more in-depth lectures, so even if you got the summit at early bird prices digital download only, you are now hitting $100 to get more info! This type of upselling is Brendon Burchard marketing 101 and is a new development in the summits this year and not a good trend in my opinion. I keep saying it, but we are not cash cows.

While summits are great on many levels, even the bad ones lol, you will get more on a pracitioner level course and I’d recommend FMU because right away you are saving $100 on every subject that comes up as all the continuing education is free for students of Functional Medicine University, and there have been many modules on SIBO featuring global experts. Next enrollment is the week of October 22nd 2018 and fees for the entirely online course come in around $2500, and this website offers you a voucher for $250 cashback, basically 10% off. Check out the payment plans page. 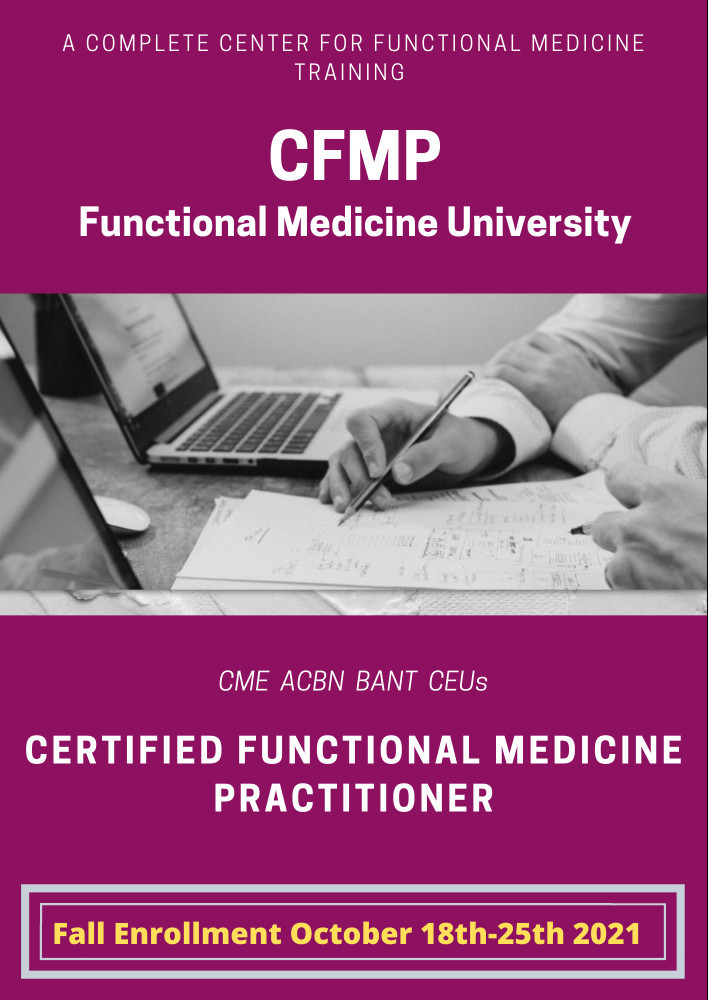